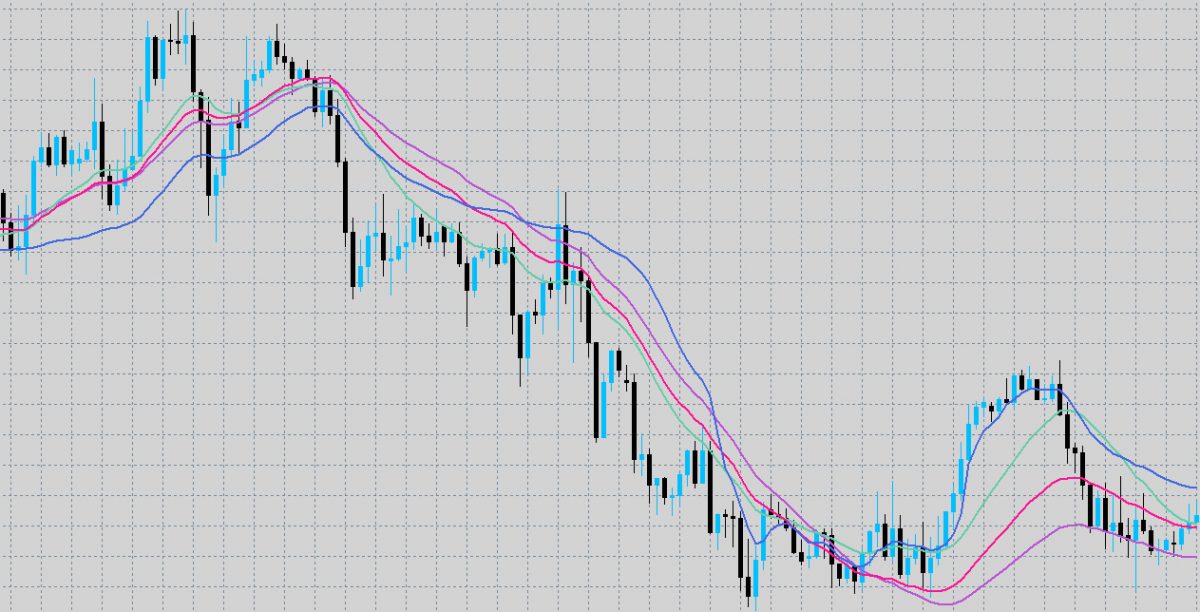 What are moving averages? Trading guide for moving averages which include EMA, SMA, LWMA, HMA, TMA, SMMA, AMA, DEMA, TMA and more on price forms including OHLC. We will cover all the different types of moving averages along with their usefulness, shifts, and averaging periods. This guide answers the common question many traders ask themselves; which MA should I use?

When writing the explanations, there is limited scope for explanation for some points. The emphasis should be more on why it actually holds relevance. E.g. the definition of median prices is very simple, but why it holds value will be missed amongst most traders.

A moving average is a technical indicator that sums up the data points of a financial security over a specific time period and divides the total by the number of data points, hence the average. It is called a “moving” average because as new price data becomes available, the total average is recalculated – differing from a static average which is calculated only once. It is known as a ‘lagging indicator’ because it uses only historical values of the underlying assets, no projections are made in the calculations, to show the trend.

What is the Simple Moving Average (SMA)

The simple moving average (SMA) calculates an average of the last n prices, where n represents the number of periods for which you want the average.

The advantage of an SMA is in its name, it is simple. The SMA value equals the average price for the number of periods in the SMA calculation. Whilst some other MA’s such as the EMA may immediately start turning during a retracement – signalling a change in direction way too early, the SMA will not. This leads the SMA getting you into trades later, when there is a higher probability of success however this will of course vary by strategy. There is no added complexity to generate false signals through a flaw in its underlying process.

However, this is also a double-edged sword for the SMA is also very slow. The SMA moves much slower than other MA’s and it can keep you in trades longer when there are short-lived price movements and erratic behaviour.

What is the Exponential Moving Average (EMA)

The exponential moving average (EMA) is a weighted average of the last n prices, where the weighting decreases exponentially with each previous price/period.

The largest difference between the EMA and the SMA is the responsiveness of the direction of the MA to a change in price, in other words its sensitivity. An exponential moving average tends to be more responsive to recent price changes as compared to the simple moving average which applies equal weight to all price changes in the given period.

For traders who are quite aggressive and hold positions for relatively short amounts of time, the EMA is preferable as it gives ample opportunity for traders to enter positions, however this does come with a larger proportion of false signals – reinforcing the requirement for excellent risk management skills to mitigate this downside.

What is the Smoothed Moving Average (SMMA)

The SMMA is desirable when trading longer horizons and explosive breakouts that often follow for example, a Bollinger band squeeze. The SMMA works well only when conjoined with other shorter-term indicators that allow the trader to time the entry into market.

What is the Linear Weighted Moving Average (LWMA)

LWMAs are quicker to react to price changes than simple moving averages (SMA) and exponential moving averages (EMA). Making them more suitable for scalping strategies, however they do suffer a lagging effect and so traders should be cautioned to not only use the MA on its own.

What is the Hull Moving Average (HMA)

The Hull Moving Average consists of taking the weighted moving average of the price period and performing mathematical calculations upon it. This all in all provided excellent price smoothness and responsiveness

Hull himself does not use the Hull MA in crossover strategies, instead it is preferred to use it as a directional indicator. For example say at a known support level the Hull MA turns upwards, that is seen as a bullish signal and vice versa.

The Hull MA is especially powerful when conjoined with a oscillator in a reversionary strategy such as the RSI which will help you gauge the probability of an effective reversal.

What is the Adaptive Moving Average (AMA)

To solve one of the largest problems with moving averages, that is the high proportion of signal to noise, the adaptive moving average (AMA) multiplies the weighting factor of the MA by the volatility ratio,

The Adaptive Moving average has also been extended by Kaufman in replacing the weighting variable in the AMA with the efficiency ratio, which can be used to gauge the strength of trends on a scale of -1.0 – 1.0.

What is the Double Exponential Moving Average (DEMA)

The Double Exponential Moving Average was introduced by Patrick Mulloy in 1994 in the Technical Analysis of Stock & Commodities magazine.

The DEMA responds far faster than normal EMA’s thus making it suitable for more aggressive traders, however the lower amount of lag also increases the amount of noise that the reader may perceive to be a signal.

What is the Triple Exponential Moving Average (TEMA)

The result is just an extension of the double exponential where, the sensitivity of the moving average is higher (lower lag) but with the increased amount of noise. Heavy filtering or large periods are recommended when using the TEMA (Triple Exponential Moving Average).

What is the Triangular Moving Average (TMA)

The moving average does not react as fast as the SMA does however this can be an advantage for longer term traders who look for higher quality signals to match their lower entry opportunities.

The TMA is also very effective at detecting ranging markets, unlike the EMA and its variants,  as the TMA will not respond much to the price changes and thus preventing the trader from being trapped within the ranges.

However this does mean that if the trend were to turn against your position you would be exiting it later and thus giving up some more profits, traders should use multiple time frames to gauge entry and exit.

Shifting a moving average simply moved the value of the MA in time. A Moving Average shift of 1 will cause the MA value of bar 0 to be the same as bar 1. In effect the moving average is now lagged by a period of 1. You can also shift the moving average forward by setting the shifting period to be negative. Be wary however as negative shifts look excellent on the chart but the latest value is still with a lag inherent in its calculation.

Moving averages can be calculated using various combinations of price forms which are listed below. Details and illustrations for each price form are also covered throughout this guide.

What is Close Price?

What is Open Price?

What is Low Price?

The low price is the lowest price reached within the candle period. The low price is represented as the bottom of the both bullish and bearish candle wicks (not body). See the OHLC illustration below for more details.

What is High Price?

The high price is the highest price reached within the candle period. The high price is represented as the top of the both bullish and bearish candle wicks (not body). See the OHLC illustration below for more details.

OHLC stands for open, high, low, close and is a common term used amongst traders and technical analysts to encompass all 4 main price forms within the candle period. See the OHLC illustration below for more details.

What is Median Price?

The median price is the quotient of the sum of highest price and lowest price within the candle period by 2. See the median price formula and illustration below for more details.

What is Typical Price?

The typical price is the quotient of the sum of highest price, lowest price and closing price within the candle period by 3. See the typical price formula and illustration below for more details.

What is Weighted Price?

The weighted price is the quotient of the sum of highest price, lowest price and closing price twice within the candle period by 4. See the weighted price formula and illustration below for more details.

All these Various price types can be used when calculating moving averages however choosing between which metric to use can often make or break strategies.

Whereas the Close price is the most often used, it can be misleading as remember when you are within the market trading, you do not know the close price until the very last moment and so when you actually go to enter into the position the bar has already closed and you may be susceptible to gaps between bars, which for scalping strategies can be fatal.

The median price represents a good balance between encompassing data and also being viable in real time use, however in very volatile markets and shorter time frames the median price can also be skewed by extreme moves in one direction. The wicks are often just seen as noise and so traders should take note of this.

Links for the TMA Indicator